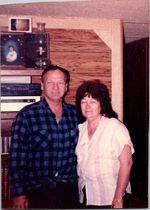 Born in Burke County, NC on March 31, 1943, she was the daughter of the late Turley Farrow Smith and Ella Mae Millon Smith. She was retired from Ruppe Hosiery.

A Graveside Service will be held on Tuesday, February 9, 2021 at 1:00 PM at Cleveland Memorial Park with the Rev. Eddie Mulally officiating.

The burial will follow the service in the Cleveland Memorial Park.