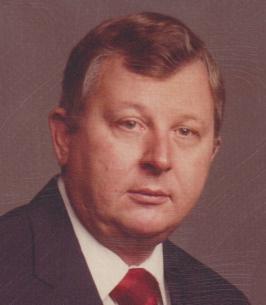 Dr. Gerald Whisnant Lutz, 88, passed away peacefully, Wednesday, November 2, 2022 at his home in Fallston, with his loving family by his side.

“Jerry,” as he was known to his family and friends, was born on August 30, 1934 to John Reid Lutz, Sr. and Madge Marie Whisnant Lutz in Fallston and spent his childhood growing up in Polkville.

During his high school years, Jerry was a proud member of the American Legion Baseball team, playing first base, and helping lead his team to a state championship in 1952.

Jerry’s love of sports would follow him throughout his life. He was a diehard Wolfpack fan and rarely missed a game. He was also a huge supporter of the Burns High School Booster Club and enjoyed many Friday nights in the stands. Until recently, he still attended the American Legion games.

Jerry graduated from North Carolina State University where he obtained a Bachelor of Science degree in Geological Engineering. It was in Raleigh that he met the love of his life, Frances, on a blind date, while she was a student at Meredith College. They enjoyed 63 wonderful years together raising their two daughters.

Following college, Jerry went to work for Nello L. Teer Company, where he scouted for rock deposits and cultivated his lifelong love of rocks and gems. One of his proudest achievements was discovering the most eastern deposit on record at the time in Princeton, North Carolina. It was in an area where his college professors had insisted that there was no rock at all. It was his great determination that proved them wrong.

Eventually, Jerry enlisted in the United States Navy, and was admitted to Officer Candidate School. He was commissioned as a Lieutenant, junior grade, stationed in Yorktown, Virginia. He proudly served his country onboard the USS Recovery as a salvage diver.

With a keen interest in dentistry, Jerry enrolled at the Medical College of Virginia School of Dentistry, now Virginia Commonwealth University, where he graduated at the top of his class.

Instead of taking job offers in big cities, Jerry and Frances returned to Fallston in 1966 to start his dental practice and lay down roots. Jerry always said that Fallston was the prettiest place he’d ever seen and thankfully, for the people of rural Cleveland County, they would finally have quality dental care. Jerry opened his dental practice in the building that previously housed the practice of Dr. AA Lackey. In 1975, he built a new state-of-the-art facility with an open operatory concept that was revolutionary at the time and has been copied far and wide.

Jerry was a blessing to thousands of patients from a wide geographic area. His greatest pride was saving teeth for patients when most people would deem them hopeless. Over the years, he was exceptionally proud that few patients were having to go to full dentures, because they were keeping their teeth longer. Bringing education and fluoride to the small town he loved made a life changing difference for many. He worked tirelessly to make a difference in dental health for his patients, ensuring that they were able to save their teeth as long as possible.

After 56 years in practice, Jerry put down his dental tools and enjoyed spending time with his family and enjoying his hobbies.

Jerry was a kind, loving spirit who would do anything to help someone in need and never wanted recognition in return. He had a great sense of humor, loved a corny joke, and could chat about any topic. He leaves behind a long and illustrious legacy in the Fallston community and his many contributions will not be forgotten.

Most of all, Jerry adored his wife, daughters, son-in-law and grandchildren.

In addition to his parents, Jerry was preceded in death by his sister, Jane Lutz Brady.

The Lutz family would like to extend their heartfelt gratitude to all his compassionate caregivers; especially Patty Beam, Kim Eaker, Betty Jo Dillingham, and Kay Lawrence.

Arrangements are entrusted to the care of Stamey-Tysinger Funeral Home in Fallston, North Carolina.