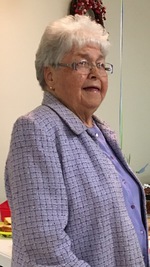 Born in Cleveland County, on June 8,1931, she was a daughter of the late Andrew "Andy" Grayson McNeilly and Blanche Laurie Hoyle McNeilly. She was employed by Alba Waldensian Inc for thirty-five years and Fasco for seven years. Josie was a lifetime member of Corinth Baptist Church where she sang in the choir and played the organ. She also volunteered with the the United Way Foster Grandparent Program since 1999.

The family will receive friends on Sunday, 5:00 pm to 7:00 PM at Stamey-Tysinger Funeral Home, Fallston.

The Funeral Service will be held on Monday 4:00 PM at Corinth Baptist Church with the Rev. Robert Goins and Rev. Danny McNeilly officiating.

The burial will follow the service in the Corinth Baptist Church Cemetery.