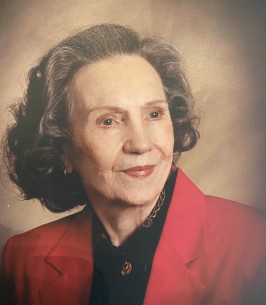 Mary Sue Davis Haag, 100, passed away peacefully on Thursday, May 26, at the Levine & Dickson Hospice House in Charlotte, North Carolina.

Mary Sue was born on January 19, 1922, to Forrest Andrew and Nettie Morrison Davis.
She was raised on the banks of the First Broad River in Lawndale and cherished her Cleveland County roots.
Mary Sue was a proud graduate of Piedmont High School where she played on the basketball team, and was a member of the Glee Club. She later moved to Charlotte to pursue her career, receiving a degree from Geyer Business College.

After meeting a handsome Army Air Corps Master Sergeant at a USO dance, she married Herbert F. Haag in 1942, and they spent 53 wonderful years together.

During her lifetime, Mary Sue enjoyed a successful career in retail. She was employed by J.B. Ivey’s downtown Charlotte, and was a Cornerstone member of the Ivey’s South Park location, which later became Dillard’s. She spent nearly four decades advising many loyal customers with her expertise in china and silver.

Mary Sue was a past Worthy Matron of the Mizpah Chapter of the Order of the Eastern Star Number 36, achieving 75-years with the organization, she was also a member of Order of Amaranth and Order of White Shrine of Jerusalem.

Mary Sue, the most elegant and refined Southern lady, was a devoted mother, grandmother, great-grandmother, sister and aunt.

She had a great eye for fine antiques and other collectibles which adorned her home, enjoyed nature and gardening, and one of her greatest pleasures in life was spending time with her family.

Mary Sue had an amazing memory, and would often reminisce with family and friends about her wonderful 100-year journey. She was a true blessing to all who had the opportunity to cross her path.

Most importantly, Mary Sue was a faithful servant of the Lord all the days of her life.

The family would like to extend their heartfelt gratitude to all the compassionate caregivers: the staff of Lake Wylie Assisted Living, Wellmore Rehab at Tega Cay, Atrium Health and Hospice House at Southminster.

Visitation will be from 1-2 p.m. with a Celebration of Life Service at 2 p.m. Saturday, June 4, at Stamey-Tysinger Funeral Home in Fallston with the Rev. Jim Ewing of Avondale Presbyterian officiating. Burial to follow at Rose Hill Memorial Park.
Mizpah Chapter No. 36 of Charlotte will honor Mary Sue with the Ritual of the Order of the Eastern Star.

Memorial considerations may be made in her memory to the Shriner’s Hospitals for Children, St. Jude’s, or to the charity of choice.

A guest register is available at www.stamey-tysingerfuneralhome.com.