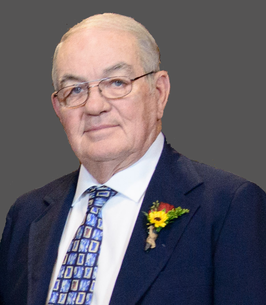 Myron Ralph Royster, age 80, of 2665 Royster Road, Fallston, North Carolina, passed away on Sunday, February 20, 2022, with his beloved wife Vickie, their children, and grandchildren by his side.
Myron was born in Fallston on December 12, 1941, to John “Ralph” Royster and Inez Cornwell Royster. The oldest of three boys, Myron spent his childhood years alongside his siblings, Tommy and George. After the sudden passing of his father Ralph in 1953, Myron was forced to to be an active contributor to the Royster family farm and take on many additional responsibilities for his family at an early age.
As a teenager he met his soulmate, Vickie Laughlin Royster. Despite Vickie’s family moving to Florida during her high school years, the two remained close and were married on October 14, 1962 at First Baptist Church in Holly Hill, Florida. After a brief stint in Florida, they returned home to North Carolina and enjoyed 60 happy years of marriage.
Myron was at his best on a tractor, showing off his prowess behind the wheel of anything fast, or frequenting his favorite local businesses to sit and visit with friends; however, he was most happy when at home surrounded by family.
After a successful career working for Carolina Freight, following his retirement, Myron transitioned to running his farm full-time on Royster Road where he was able to teach his family and many others the way of the land. He also found enjoyment driving the water truck at Thunder Valley Speedway in Lawndale, oftentimes entertaining others with his daredevil demeanor behind the wheel. He was also a member of Fallston #356 Masonic Lodge, and Double Shoals Baptist Church.
Myron is survived by his loving wife Vickie, daughter Myra Royster Dedmon, husband Rodney; and son Brian Ralph Royster. He was a very proud grandfather to 5 grandchildren: Kevin Dedmon (wife Kristyn), Caleb Royster, Kristopher Dedmon (wife Elizabeth), Madison Royster, and Mallory Royster as well as 3 great grandchildren Kixxon, Kolton, and Korbin Dedmon. He is also survived by brother George Royster, and wife Judy; and sister-in-law Terry Royster.
In addition to his father Ralph, he was preceded in death by his mother Inez Cornwell Royster, brother John Thomas “Tommy” Royster, and nephew Jonathan Thad Royster.
A visitation is planned for Thursday, February 24, 2022, from 1 pm to 2 pm at Double Shoals Baptist Church on 318 Old Mill Rd Shelby, NC 28150, with a memorial service to follow.
Arrangements have been entrusted to Stamey-Tysinger Funeral Home & Cremation Center.