To share your memory on the wall of James Junior Swink, sign in using one of the following options:

Born in Cleveland County, on January 15, 1938, he was the son of the late James Henry Swink and Flossie Tallent Swi... Read More
James Junior Swink, 83, of David's Chapel Church Rd., Lawndale, passed away on Thursday, March 25, 2021 at his residence.

Born in Cleveland County, on January 15, 1938, he was the son of the late James Henry Swink and Flossie Tallent Swink. He was retired from Drexel Furniture, Plant 60 and was a member of David's Chapel United Methodist Church. Mr. Swink loved going to the Belwood Tractor Show for many years and making homemade molasses and was known as the Molasses Man. He was in the US Army.

A Funeral Service will be held on Sunday, March 28, 2021 at 3:00 pm at David's Chapel United Methodist Church with the Rev. Johnny Norton officiating.

The burial will follow the service in the David's Chapel United Methodist Church Cemetery.

Memorials may be made to David's Chapel United Methodist Church,

To send flowers to the family or plant a tree in memory of James Junior Swink, please visit our Heartfelt Sympathies Store.

We encourage you to share your most beloved memories of James Junior Swink here, so that the family and other loved ones can always see it. You can upload cherished photographs, or share your favorite stories, and can even comment on those shared by others.

Posted Mar 29, 2021 at 02:05pm
This isn’t a forever goodbye but a so long for now, I’ll see you again.
We’ll stand together in the presence of our Lord, who took away our sin.
No earthly mind can imagine, the heavenly home God has prepared.
But you dear uncle know, because you’re already there.
See you in heaven. The family of Ruby Swink Leatherman
Comment Share
Share via:
J

Posted Mar 29, 2021 at 07:57am
Dear Judy,
I am saddened to hear of his passing. You both were some of my favorite customers when I worked at the bank. You guys already made my day. (and he loved to pick with me). I know he will be missed but one day we will see him again. I am lifting you up in my thoughts and prayers.
Comment Share
Share via:
LW

Posted Mar 27, 2021 at 07:55pm
Uncle Junior I love you and will miss you. A part of my heart goes with you. You always made me feel important and loved. You and Aunt Judy loved me unconditionally and never judged me. I guess you got to see mama last night. I'm sure you guys are rejoicing and having the time of your lives. I'm so glad your not hurting anymore. You were always my favorite uncle and always made me feel important to you. Please watch over me I need all the help I can get. You and mama are now my guardian angels. Go ride those tractors all over heaven. I will meet you there someday. I love you and miss you.😥
Love your niece Linda
Comment Share
Share via:
KE

Posted Mar 26, 2021 at 05:42pm
Prayers for you Judy, and you're family. I am so sorry to hear of Junior's passing, he was a sweet man I asked momma and daddy about yall all the time. I know they are very heart broken they thought a lot of Junior, and thinks a lot of you. We love you Sweet Judy, we are praying for you!.
Comment Share
Share via: 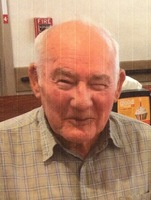